The Critical Documents of Chilean Art collection is made possible by the generous support of Juan Yarur Torres, President, Fundación AMA

On July 24, 2020, at the height of the Chilean quarantine and the global pandemic, Lotty Rosenfeld passed away. She was 77 years old. The news spread fast and, as always, prompted a desire to know more about her work. This text presents a brief overview of her long and consequential career.

Rosenfeld started out as a printmaker in the late 1960s but the Chilean coup d’état in 1973 set her on a different course. The social upheaval and institutional breakdown wrought by the military takeover made her question her art practice, as she explained in an interview with the Spanish broadcasting network Radio y Televisión Española (RTVE) in 2013[1].

That questioning also affected how she worked because, though Rosenfeld produced a body of personal work, group efforts and collaboration were a hallmark of her career. In 1977 she and some other artists started Espacio siglo XX. Who, exactly, was part of that group depends on which documents are consulted, but among them were Alberto Pérez, Juan Castillo, and the writer Marcela Serrano. It was a space for cultural activities, a reflection of Rosenfeld’s wish to encourage gatherings of artists who worked in different disciplines. A December 1977 newspaper article explained that Espacio siglo XX was open to all forms of artistic expression, from the “avant-garde” to groups of artisans. The article describes Lotty as: “an exquisite printmaker who has gravitated from her earlier subtly erotic subjects to a conceptual and abstract expressionism that relies on disposable materials. Like a poster stuck on a wall, her work includes torn strips of colored paper—black, red, and blue—behind an enormous NO. An underground urban language expressing a troubled world’s reaction and hope”[2]. That newspaper article documents her transition and explains how she started working with the word “NO,” a project that, in September 1983, evolved into the “NO+” [No More] symbol that was used in a city-wide intervention performed by the Colectivo de Acciones de Arte (C.A.D.A.) (1979–85) and that, to this day, is used to protest against injustice.

She started working on Una milla de cruces sobre el pavimento [A Mile of Crosses on the Pavement], her best-known project, in 1979, the year when the art action group C.A.D.A. was founded. It was a complex, landmark intervention that then evolved into a portable action that could be transported elsewhere and take on new meaning depending on where it was performed. It consisted of placing adhesive white strips across the intermittent traffic lines painted on roads, transforming them into crosses. Rosenfeld first performed this action on Avenida Manquehue; she spent four hours installing her crosses, which were later destroyed by passing cars. She photographed and videoed her ephemeral intervention for two reasons: to document her work and to create other works, mainly video installations, that provided alternative readings. In the mid-1980s she produced another action; on this occasion she parked a truck on the side of the road where she had staged an intervention several months earlier and, using the truck as a screen, projected the 16 mm film, ¾-inch videotape, and photographs she had taken during that intervention. Her co-director on this project was the writer Diamela Eltit, who was also a member of C.A.D.A., as noted in the book that describes the event and was published at the time. The eponymous book was an experimental project that includes the poetic text “Congestionamientos” that was co-authored by Eltit and the writer María Eugenia Brito. This document can be found in the ICAA Digital Archive (doc. no. 744653).

Rosenfeld’s action manipulated everyday situations and questioned the signs that regulate and standardize human life. Her critical statement can be extrapolated to all spheres of life, which is why she described her work as a way to challenge power. She staged her intervention in several different places; in 1982, for example, she performed it on the street outside the White House, the symbol of political power in the United States. In April of the following year, she created her crosses in the Cristo Redentor [Christ the Redeemer] tunnel between Chile and Argentina. Then, in June, she went to Berlin and staged her action at an allied checkpoint on the border of the Federal Republic of Germany, as it was known in those days. While she was there, she crossed the border physically, on foot, many times. She documented her movements in Proposiciones para (entre) cruzar espacios límites [Proposals for Intertwining/crossing Borderlands] (4 minutes, 1983), the video she produced for Chilenas. Drinnen und Draußen. 40 Künstlerinnen zum Thema Zenzur und Exil [Inside and Out: 40 Chilean Artists on the Subject of Censorship and Exile], the exhibition organized by Cecilia Boisier to show works by Chilean women artists who, like Boisier, lived in exile in Germany. They all contributed works created specifically for this exhibition, at which Rosenfeld represented artists living in Chile. When she returned to Chile, she tried to show the video at the Tercer Encuentro Franco-Chileno de Videoarte but was prevented from doing so by the Consejo de Calificación Cinematográfica, the dictatorship’s agency in charge of censorship, which confiscated it. Lotty wrote about this project in her book, Desacato [Disobedience]; this text can be accessed in the ICAA Digital Archive (doc. no. 744898).

Rosenfeld’s work was censored but she managed to take part in official events. In 1981, she and Diamela Eltit entered the Concurso Nacional de la Colocadora de Valores where they submitted their installation Traspaso cordillerano [Crossing the Cordillera], for which they won the Gran Premio de Honor, the competition’s highest award. The installation consisted of four television sets, all showing views of the Andes mountain range, from which neon tubes connected to a tape recorder that played a soundtrack from a brain operation combined with an Andean tune. According to the authors, the installation “suggests going beyond the limits, removing tumors, restructuring a new way of thinking.” [3] Rosenfeld and Eltit worked together on many different projects for over three decades; in addition to their own individual works they supported each other’s projects and worked with the Movimiento Unitario Mujeres por la Vida (1983), the Women For Life Movement that organized public performances in protest against the military dictatorship. Viuda [Widow], one of their joint projects, consisted of a newspaper and magazine insert featuring the face of a woman whose husband had been a victim of the military regime (1973–90). This insert can be seen in the ICAA Digital Archive (doc. no. 732034). C.A.D.A. took responsibility for the action, but Eltit and Rosenfeld were the only members of the original group still involved at that stage; they worked on this project with the photographer Paz Errázuriz and the writer Gonzalo Muñoz. It was considered the group’s final action.

I would like to close with a story told by Mirentxu Bustos, a psychologist and a member of the Mujeres por la Vida movement, during a gathering celebrated in memory of Lotty Rosenfeld. Bustos recalled that, at a meeting when the group was brainstorming new ideas for protest performances, Lotty suggested breaking a thousand plates in front of the Carabineros building, the headquarters of the Chilean national police force. The idea was derived from the popular expression tirar los platos por la cabeza [throwing plates at each other’s heads], meaning a brouhaha, a shouting match, which was both a reference to women’s home lives and a metaphorical response to the violence committed by the government. The idea was rejected and, according to Bustos, Rosenfeld left the meeting muttering “it would have been beautiful.” In the late 1990s or early 2000s, a political event impacted the Democratic Transition. Berta and Nicolasa Quintreman, two Mapuche-Pehuenche sisters, opposed the construction of the Central Hidroeléctrica Ralco, the hydroelectric plant in the Alto Bío Bío area, which was their land. This conflict dragged on for years as the sisters stood up to the Chilean government and its plans for “progress” hatched in league with the private sector. At one of the never-ending negotiation sessions to which they were subjected the sisters picked up some plates that were in the room and started smashing them as they shouted in protest; the event was shown live on TV. Rosenfeld took clips of that scene and used them in her works, as for example in the video La Guerra de Arauco [The War of Arauco] (6 min, 2001), which takes its name from the conflict between Spanish colonizers and the indigenous resistance that was active between 1536 and 1810. The video includes a Mapuche woman talking about the conflict that transcended its original historical moment and is still with us today. Most of the time she is speaking Mapudungun, the Mapuche language, with no translation, which in itself testifies to a disconnect and is evidence of a critical decolonial perspective.

Rosenfeld’s work always sought to shine a light on the various conflicts in Chilean society, but that are also capable of addressing problems that cut across distinct territories. Her critical art and her development strategies attest to a unique body of work that, far from getting comfortable, remained constantly alert and ready to intervene and destabilize the signs that blend into our everyday environment while maintaining the structure that supports racial, gender, and class inequalities. 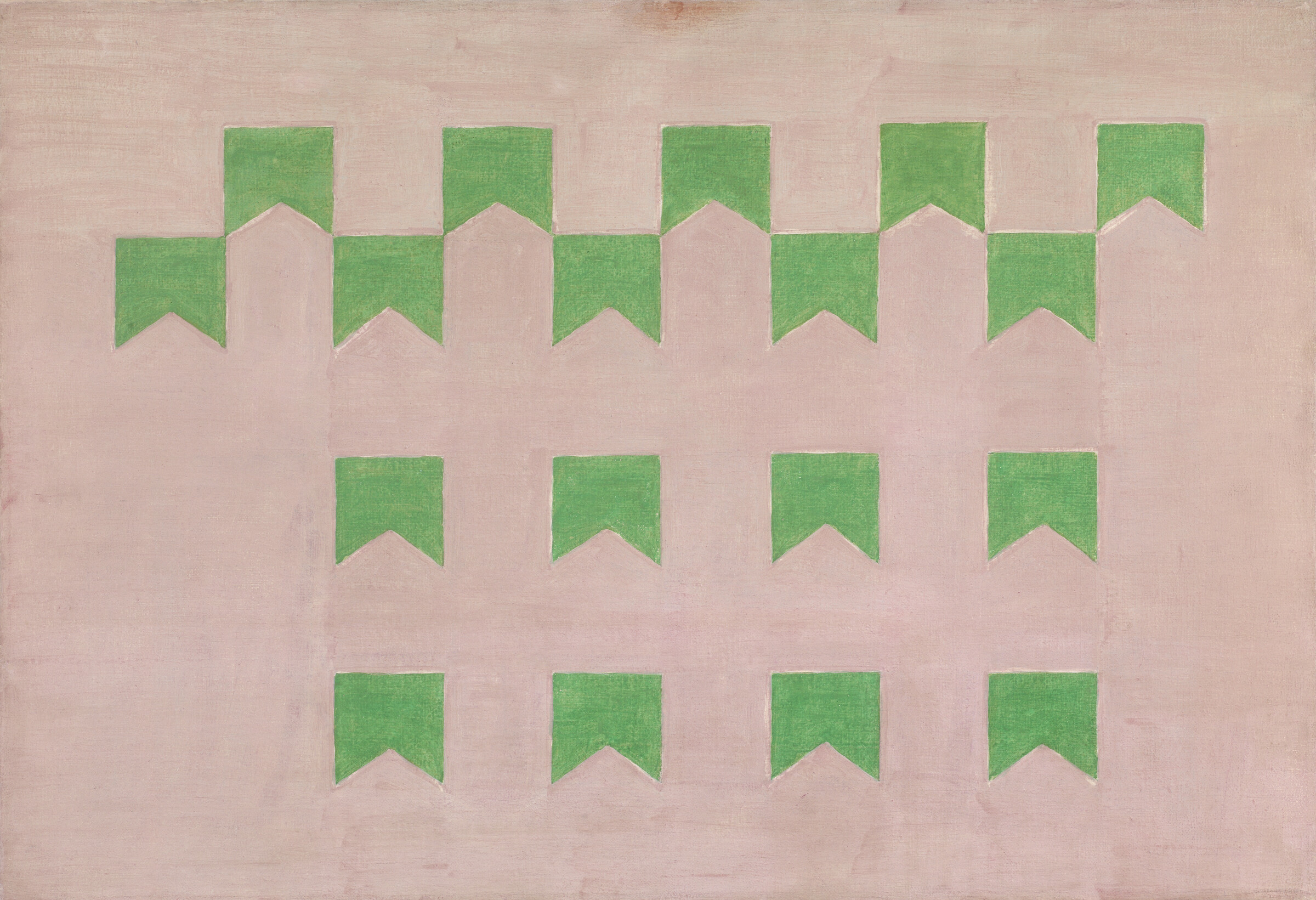 This fall the ICAA resumes its Object-based Learning seminar with the University of Houston. Over the course of the next few weeks we will introduce some of the course’s faculty as well as insights and commentary from the students enrolled in the class. First up is Dr. Corina Rogge, Andrew W. Mellon Conservation Scientist at […] 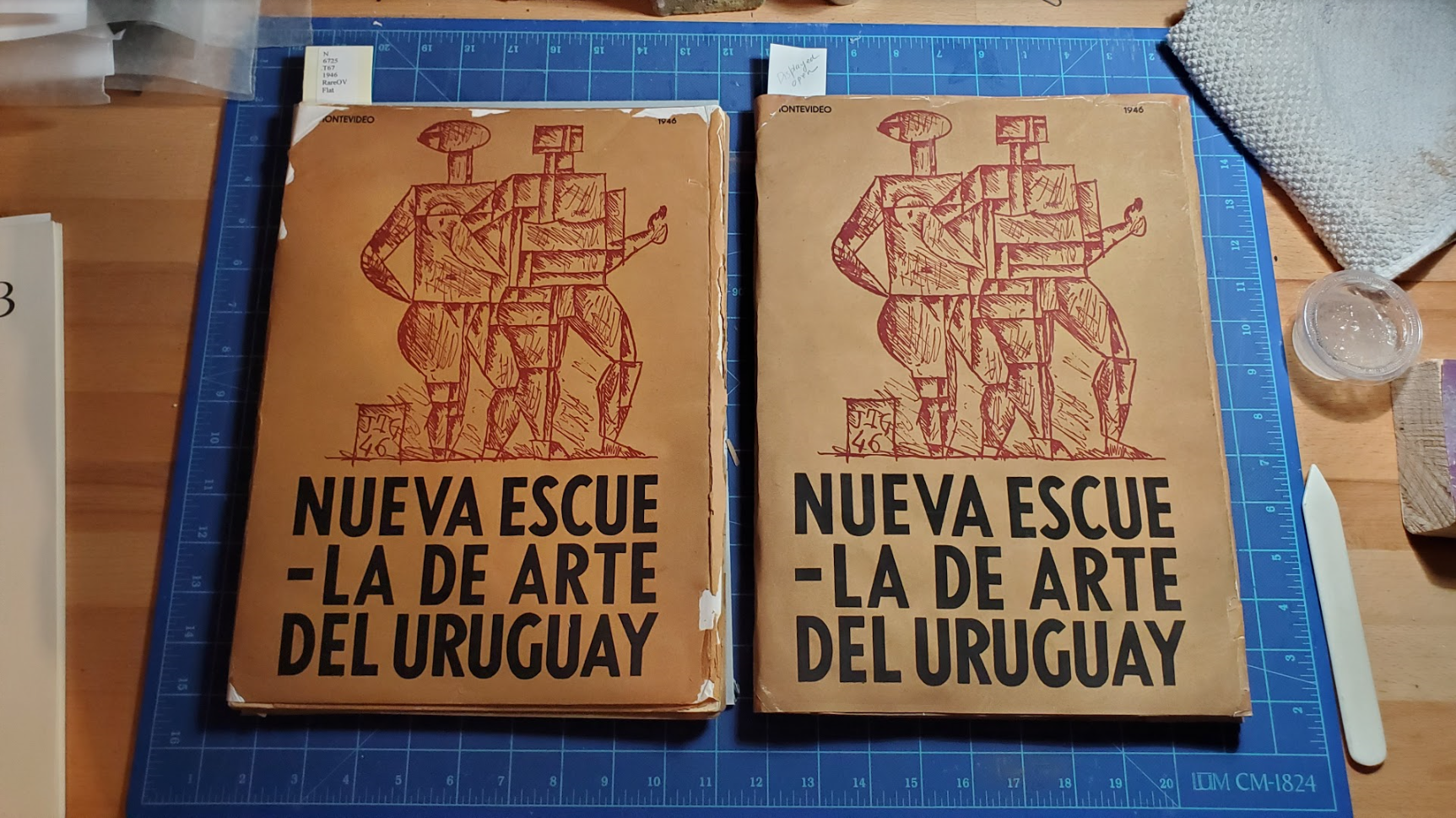 By Katie Bogan and Sarah Stanhope In summer 2020, Hirsch Library staff put their talents and efforts into showcasing printed matter in the Latin American art permanent collection galleries in the new Kinder Building, which is graced with large windows that let in lots of natural light. Extensive light exposure can cause damage to paper […] 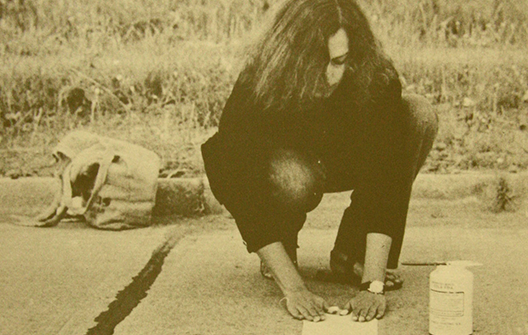 The Critical Documents of Chilean Art collection is made possible by the generous support of Juan Yarur Torres, President, Fundación AMA On July 24, 2020, at the height of the Chilean quarantine and the global pandemic, Lotty Rosenfeld passed away. She was 77 years old. The news spread fast and, as always, prompted a desire […] 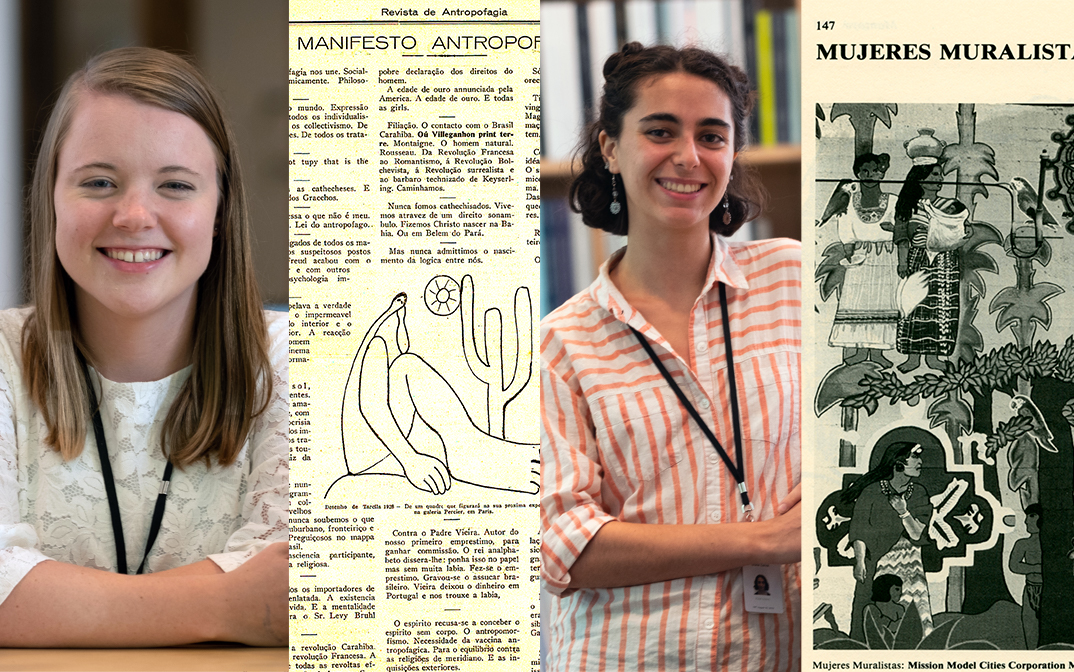 As many schools and universities continue some form of remote learning and virtual instruction in 2021, the ICAA would like to provide a forum for faculty, researchers, and students to reflect on the role of digital resources in their research, lesson planning, or exploratory learning. In this post, we feature two accounts from recent graduates […]